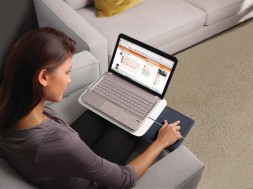 Touch screens laptops have brought a revolution in the tech world of laptops. To see the pace of new inventions and technology one could only expect sensing laptops in the future. The touch screen laptops are gaining popularity but they are not affordable for everyone because of their top end prices. So far most people are enjoying them from a distance and we feel very excited after catching their glimpse on TV shows or hi tech computer labs. Practically every person wants this laptop and many people are wondering when their prices will be lowered.

Touch screen laptops have made the work experience a lot more fun and easy, who knew by expanding our fingers we can widen our screen and flip the pictures with the flip of a finger. But touch screen laptops have made it possible by giving all the power to our finger tips. It is a blessing for those people who were frustrated by touch pad cursors of laptops now nobody has to carry a mouse with them.

The system of these laptops is based on the three principal components. The sensors sense our touch and transfer it to the converters who in return transfer it into language understood by the software. That software after receiving the data sends the commands to the system, while reading the process seems very easy but actually it has more depth.

But most of us will be wondering how the sensors sense the touch on screen, well a matrix of waves or electric current is created on the screen and when we touch the screen these waves are blocked at one spot and the sensors immediately sense this change and in case of electric current a device sense the current fluctuations and send the information to the sensory component and the cycle begins. All this process takes less then a second and we can enjoy the functions of touch screen with immense swiftness.

People who love to try out new technology can not wait to get their hands on it, but hey have to face the huge wall of money before getting to touch screen laptops. Fortunately for them a gadget is introduced by NAVIsis which can convert the regular screen into touch screen. But obviously it has its differences it does not provide the exact same experience of a touch screen.

When we buy this gadget we will also receive a stylus which is used to touch the screen of your laptop. It is safer to use as the material used in it proves to be less harmful for the screen. There are two types of gadget available in the market always make sure to buy the A grade quality. It will be a little expensive but it’s worth it. You don’t need professional help to install this gadget follow the manual instruction carefully and you can do it yourself.

This gadget is for people who need to draw and make angels everyone should not install it. Because it will do no good for them instead it will damage the screen of their laptops. If you are using such gadget be sure to use the stylus to operate the touch screen. Because the oils and other sticky material form fingers can transfer to the screen.

The normal laptop screen are not meant to be touch ones, that’s why they can get damage if will start poking the screen with our fingers or nails. People who love new technology should patiently wait and save up for original touch screen laptops, because only then they can enjoy the true experience of touch screens.

26.32K
previous Spy Camera - Perfect Gadgets for Any Sting Operation
next How to get cheap cool gadgets