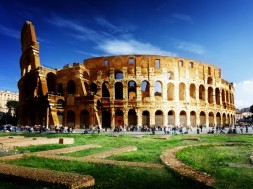 Europe is known for its glamorous and well-maintained historical architecture. Most European itineraries have attractions that bring to life several ancient civilizations. In fact, Europe’s history is categorised into some important phases such as Greek, Roman, the Renaissance, the Reformation, the Revolution and the World Wars. Admittedly, the Renaissance is a well-loved, liberal and creatively stimulating era. Yet, the heritage sites of every culture have their own aesthetic beauty and unique vision.

Rome is the most popular historic destination in this continent. As a capital city, it is part of all Italy holidays. Yet, your historical trip can include a very fascinating itinerary. You can book into one of the many historical hotels in Rome. It could heighten the historical vibe of a simple Italy holiday too. Historical sightseeing in Rome can vary based on the number of days in your Italy holiday. But, the must-see historical attractions in Rome include the Colosseum, the Palantino, the Roman Forum, the Pantheon, etc.

Prague is the capital of Czech Republic. But historically, it was the capital of Bohemia and a major transportation hub between Europe and Asia. Today it has restored much of the ancient architecture dated from that period. The landmarks and attractions in this city had to undergo major restoration as the city was heavily bombed during the World Wars. The best examples of Romanesque architecture in Prague is the Prague Castle, the national theatre, St. Vitus Cathedeal, Klementinum, Old Royal Castle, Museum of decorative arts, Charles Bridge, Ghetto museum, etc.

Vienna, another must-see destination, is the capital of Austria. The old world charm of this city is both endearing and memorable. Steeped in history, the imperial grandeur of this city is still alive and throbbing through its architecture, culture and art. Travellers fall in love with admirable structures such as the Shronnbrunn Palace, Belvedere Palace, imperial apartments, Sigmand Freud Museum, Otto Wagner houses, Spanish riding school and the Vienna State opera house. With such remarkable cultural landmarks, Vienna is still truly the cultural centre of Europe. Most popular Europe travel itineraries include Vienna for this elegance and historic appeal. You almost feel like you’ve stepped into a chapter in the history of Europe. So indulge your passion for history in your upcoming Europe trip.