iPad Air – One of the Best Tablets in Town 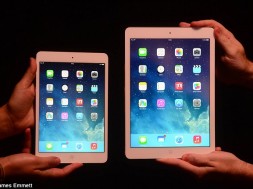 iPad Air – One of the Best Tablets in Town

Tablets have become one of the must-have gadgets in today’s world. They’re extremely functional and you can do a lot of things in a tablet such as make and share presentations, watch movies, play games, make documents, send emails, stay connected on social media, take pictures and so on.

Apple was founded in 1976, by Steve Jobs and Ronald Wayne. It is an American multinational corporation headquartered in California. Apple designs, develops and manufactures consumer electronics, computer software, online services and personal computers. Apple is known for its Mac products, such as iPod media player, iPhone and iPad. They also have a series of online services, such as iCloud, iTunes Store and App store. Apple’s consumer softwares include OS X and iOS operating systems. Apple iPad was first released on 27th January, 2010. The iPad ran on a modified version of iOS and it offered multi-touch interaction. The iPad Air and iPad Mini were launched in 2013.

The iPad Air, like all other Apple products is loaded with amazing features and uses the iOS 7 operating system. Apple stands out from all its other competitors by using its unique operating system, which has its own set of advantages, such as a brilliant user interface and user experience, efficient processor, powerful multitasking abilities, peer-to-peer SDK, tablet-optimized app listing, better HTML support and many more. The Apple iPad is extremely thin and light, which is its added advantage. It is a very powerful and capable device designed with A7 chip, advanced wireless and has great apps. It has an aluminium unibody design and is available in black and white colors. Apple iPad Air is very popular for its unique Retina Display; the text and the quality of images look razor sharp. This tablet has a A7 chip and M7 coprocessor. The A7 chip is very effective and efficient and takes the Apple iPad to another level – the apps run faster, the iPad feels lighter and is quicker, the games are most responsive and many other advantages. The M7 coprocessor helps in measuring motion by pulling data from accelerometer, gyroscope and compass. The iPad Air has Ultra-fast Wi-Fi and has two antennas and MIMO (multiple-input multiple-output) technology.

The Apple iPad Air has built-in apps, such as FaceTime, iPhoto, iMovie, GarageBand, Pages, Numbers and Keynote. It has a 5MP camera with AutoFocus and face detection features. The iPad Air is available in 8 GB, 16 GB and 32 GB variants. Depending on your needs and requirements, you can pick the one with a suitable storage space.

You can buy iPad Air online or from authorized Apple stores depending on your convenience. Shopping online is easy, safe and convenient. Some online shopping websites provide easy return and replacement policies to ensure that you have a satisfying shopping experience.

27.45K
previous Is the Smartphone the Best Business Phone?
next Be Mobile With New Age Smartphones