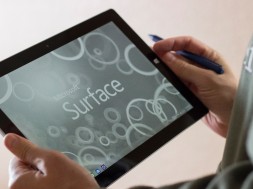 Last year’s 4th-generation iPad was such a minor update, there was little reason for iPad 3 owners to consider taking the plunge. But this year, the iPad Air marks the biggest physical redesign the tablet has ever seen. Is it worth the upgrade? Read on, as we share our initial impressions of the lighter, thinner iPad Air.

Physically, the iPad Air is like a big iPad mini. The first time I picked it up, it provided the same kind of “Holy crap, that’s light” moment as when I first used the mini. The iPad Air is almost 30 percent lighter than last year’s iPad, and you really feel the difference. I thought the iPad 4 felt like a heavy brick next to the iPad mini. With the Air, that playing field has been leveled. I can hold it very comfortably with one hand, something I could previously only say about the mini.

Speaking of the iPad mini, I was a fan of the first-gen model’s design and build, but its last-gen display made it hard to stick with. My eyes would literally hurt after using its 1,024 x 768 screen for extended periods (once you switch to high-res screens, it really is hard to go back). The iPad Air offers that same build – the kind that makes most other tablets’ constructions look crummy by comparison – along with a huge 9.7-in Retina Display. It’s a very nice combination.

Another thing worth noting: did you ever notice how the last two iPads’ aluminum chassis would often get hot to the touch? In my time so far with the iPad Air, that’s nowhere to be seen. That’s also expected, given the smaller battery (and the general progress Apple’s engineers can make in two years), but it should also be a welcome change if you’re upgrading from one of the older Retina Display iPads.

That display, by the way, is exactly what you saw on the 3rd- and 4th- generation iPads. But I find that the tablet’s smaller face puts more focus on the screen. There’s less iPad to look at, and the same size of content to look at. Same size painting, smaller frame.

As for that A7 chip, just know that performance isn’t an issue here. I didn’t think performance was an issue with the iPad 4 either, so that alone probably doesn’t make the upgrade worthwhile. Just consider it a nice bonus.

As for upgrading, well, that’s the big question here. We have a lot more time to spend with the iPad Air before publishing our review (and we can’t speak to battery life yet), but my first impression is that this is the biggest step forward any single iPad has taken from its predecessor. It doesn’t necessarily look like it on paper, but its feathery build really changes the experience of using it.

Sure, the iPad Air’s screen is unchanged from the last two iPads, and its significant performance boosts are almost superfluous (given that very few app developers push the hardware to its limits). But for a large personal computer that you hold in your hand, a 28 percent drop in weight – along with those shaved bezels – is a pretty key upgrade.

Keep an eye out for our full review. And for more on the “to upgrade or not to upgrade?” question, you can check out our comparison of the Air to the last three full-sized iPads.