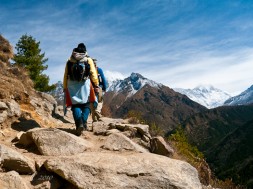 Nepal, home to Mount Everest and the sacred place where Buddha stepped is dominated not only by the world’s most imposing mountains but also by rich bio diversity and world famous cultural heritages. Although the country is relatively small (147,181 square kilometers), 80 percent of its territory is occupied by the dramatic peaks of the Himalayas. Cultural heritages, in addition, have captured the mind and heart of all those beautiful minds who finds it delightful to experience wonderful ancient architecture and arts of mystery. All these diverse aspects make Nepal one of the most sought after tour destination throughout the world.

The Mountains of Nepal have stood as irresistible landmarks for the world’s tour since Nepal opened its doors to visitors in the 1950s. This small, hospitable country has since become an exceptionally popular destination for travelers, whether they are in search of climbing challenges or spiritual enlightenment. Out of 14 peaks over 8000m known as the eight-thou sanders, eight of them lie in the Nepal Himalaya. These include the highest mountain in the world, Mt. Everest (8848m) and the third highest i.e. Mt. Kanchenjunga (8586m). Other highest mountains include Mt. Annapurna (8091m), Mt. Lhotse (8516m), Mt. Makalu (8463), Mt. Cho Oyu (8201), Mt. Dhaulagiri (8167m), and Mt. Manaslu (8163m). Experiencing these mountains first hand is the major highlight of Nepal.

Trekking in Nepal is another major motive of Nepalese tourism. Nepal is well known for some of the most spectacular, exciting and breathtaking trekking that nowhere can be found in the world. Direct exploration of world famous snow peaks like Mt. Everest, twinkling lakes like that of Fewa, flowing rivers, streams and falls are all there to delight its visitors. More than 850 species of birds and rare animals like that of one horned rhino, snow leopard and Bengal tiger are all there to welcome its visitors.

Some other who enjoy culture and distinct life style finds Nepal Himalaya Trekking very productive. World famous Hindu temples like Pashupatinath, world famous Buddhist shrines like those of Swyambhunath and many other historical art and crafts takes its visitors to the land of mystery. The majestic towering mountains, turbulent streams, azure lakes, softy waterfalls, conjure visions of a Himalayan Shangri-La, rich cultural heritages and unforgettable Jungle Safaris have attracted thousands of visitors to Nepal each year.

Nepal celebrated the year 2011 as Nepal Tourism Year campaign, setting the ambitious target of welcoming one million visitors. It was successful disseminating positive information about Nepal in international arena. Nepal announced Visit Lumbini Year 2012 – to promote Lumbini, the birthplace of Lord Buddha. Nepal, mentioned as a trekker’s paradise, offers once in a lifetime opportunity to the trekkers to visit remote parts of the country and get acquainted with lifestyle of its people.