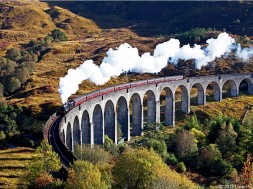 My last trip to Europe was a solo four week train journey that included some dozen countries. This advantage to this was that I got to see lots of places. The downside was that I didn’t stay anywhere very long. Yet this was how I planned it, and I don’t regret it. A trip like this enables one to visit many destinations and learn where you’d like to return at a later date. In addition to this, I actually like to travel long distances by train, having gone back and forth across America that way some seven times.

Modern Europe has been made to encourage train travel. With its myriad of relatively small countries and diverse cultures (even with the increasing homogenization of the European Union and the common currency, the Euro), you can arrive in a very different place from where you started only a few hours ago.

My trip began in London (which I flew to from New York). After a Eurostar ride to Paris, I made my way to Amsterdam and then south to Italy (Milan, Rome and Florence), then still further south to Athens. Then I zigzagged back north, through Italy again, then Germany and the Scandinavian countries of Denmark, Sweden and Finland, where I went as far north as the Arctic Circle (where the sun literally does not set for part of the year).

The European trains that I took were mostly comfortable and efficient. I did not opt for any amenities such as private rooms. While meals are sometimes available, I mainly tried to eat at my destinations, as dining is one of the pleasures of European travel.

Based on my experiences, I can offer a few tips for buying and using a Eurail pass.
One, look into all the different kinds they offer. There are discounts for students, for example. Another important factor is to decide how many countries you want to visit. Don’t pay for more than you need. For my own trip, I wanted to go from one end of Europe to the other, so I purchased the most inclusive pass. But if you only want to visit a few countries, look for a pass that only charges you for that.

One thing you can do, which I often did, is to use a train as a hotel room. That is, you take an overnight train. This is a good way to save money on accommodations, but can get tiring after a while.

When you are traveling, be sure to check if the train you are on accepts passes. Most do, but I had one unpleasant experience aboard one train that I thought would accept my pass and didn’t. So I had to purchase a separate ticket. If you check this ahead of time, you will avoid such scenes.

Europe By Train: A Great Experience

There is no better way to see Europe than by train, especially on a budget. You can see an endless variety of landscapes in a relatively short amount of time. Europe is set up for rail travel, so you can get practically anywhere, unlike the U.S., where many people never even consider taking trains (or buses). In recent years, Eastern European countries, such as the Poland, the Czech Republic and Romania are open to travel, though they are not included in the same passes as Western Europe.

Traveling through Europe by train is something everyone should experience at least once in their lives.