The Unforgettable Trip to Machu Picchu in Peru 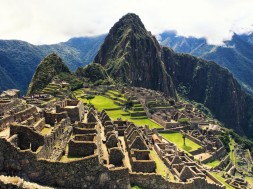 The Unforgettable Trip to Machu Picchu in Peru

Macha Pichu in Peru is an ancient city that was built on a hill with the river flowing a hundred feet at the bottom. It is one of the most popular destinations in Peru and the sight that beholds is quite unique and unusual for the avid traveler. The city was developed by the Incas about six hundred years ago and it is also known as the head of the Incan civilization.

You can take a train which leaves early in the morning to reach Macha Pichu. You have to get down at the train station called Ollantaytambo. There is a small café in the station where you can take breakfast and then begin your journey of the Incan ruins. You can buy walking sticks, goggles’ and caps from the local store. The town of Aguas Calientes is the base from where you start your climb of Machu Pichu. You can get to the town only by foot or train. There are no vehicle roads to lead to this town.

The ancient city of Machu Pichu was developed amidst the Andean Mountains with the Urubamba River moving at the base. In the winters you will see glaciers develop in the mountains. The best time to go is in the summer where the clouds are clear and the trail is dry. The bus will leave you about 1,000 feet at the base of Macha Pichu from where you begin your hike up the trail. The hiking lasts for several hours before you reach the ancient city but it is really worth your effort.

You can hire a local guide at the entrance of Macha Pichu. The guide will explain to you the history of Macha Pichu and how the city was developed over several years. It is very interesting to know how the city was developed and the architecture designs used even in those times. The guide explains to us that the city was built in 1400s and the city was abandoned by its inhabitants just hundred years after its development. The Incase were attacked by the Spanish and hence they had to leave the city to save their lives. Since no one used to live there the city soon lost its way under the thick foliage and then lost in nature.

However the city was discovered by an American called Hiram Bingham in 1811. The site has been declared as a UNESCO World Heritage Site and the number of visitors to the site is limited by the Government. The city served as winter retreat for its people. The Incans were known as the best architects in the world at that time and they built the whole city with stones. Such was the precision of the placement of the stones that even today you can’t pass a knife through the small gaps. People used to live here like they would live in any other city tending to their animals, collecting good, doing rituals, etc.