Places To Go In Egypt 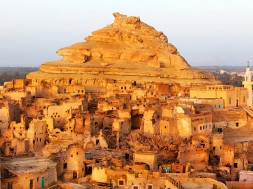 Places To Go In Egypt

The ancient historical sites in Egypt make the country one of the best travel destination in Africa. There are over 80 Pyramids found in this country, the Pyramids of Giza located on the left bank of the Nile in Cairo are the most ancient and an attractive tourist destination. The various pyramids found in this country were built to serve as tombs for the royal families. Among the three pyramids at the Giza necropolis is the Pyramid of Khufu also known as the Great Pyramid, the Pyramid of Khafre and the Pyramid of Menkaure. The Pyramid of Khufu is about 481 feet and is the largest and the oldest of all Pyramids. It is also the only one of the Seven Wonders of the ancient world still remaining today.

Cairo is the capital city of Egypt and, it consists of both ancient and modern tourist attractions. Khan Al-Khalili market is a good example of the ancient attractions. This market is one of the largest and oldest markets in the world dating back about 3000 years ago. It is a huge market which attracts both the local and international tourists. Almost everything is sold here including food, clothes, ornaments, perfumes and curving. The Museum of Egyptian Antiquities is another ancient site where about 120,000 ancient items are displayed. The legendary treasures from Tutankhamen burial are the most popular exhibits.

The Valley of Kings is another tourist destination. This site is located on the West Bank of the River Nile in Thebes and it has 62 tombs. The Valley has two components namely the West Valley and the East Valley. The East Valley is where the New Kingdom of the Pharaohs is found and is the most attractive site for tourists. These tombs include the tomb of King Tut (the youngest King to have ever ruled in the ancient and the modern Egypt). These tombs contain many treasures and artistic decorations including the books of the underworld hence giving visitors better understanding of the lives of the ancient Pharaohs.

The two temples at Abu Simbel are very interesting to visit. One of the most interesting things about the Abu Simbel temples is that, they were all built to satisfy the ego of just one King. Construction of the Aswan High dam on river Nile was done in 1969.The dam helped contribute to the relocation and re-assembling of the temples to higher and safer ground. The Pharaonic Village is another ideal site for families to visit. A tour to this site will actually take you 3000 years back to the days of the pharaohs. It is a beautiful place where you will get entertained and learn more about the past.