Soccer Dribbling – The Move That Made Leo Messi Famous 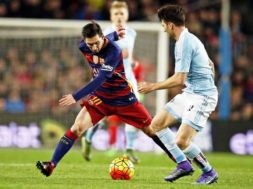 Soccer Dribbling – The Move That Made Leo Messi Famous

There’s no question to every body that loves football (soocer), loves to see a world class dribbler. The player that can run past defenders with ease. They set the crowd a light, the fans want to see them, young player want to be them. Every player wants to know their secret, the simple tricks is hard work, dedication and sacrifices. During your football training (soccer training) either individually or as a team you must try to get as many touches on the ball as possible. There are a vast a ray tricks and dummies world class players use to beat there opponents, but the truth is that you really only need to master a couple to be an effective dribbler. Look at Leo Messi consistently goes past defenders like they were standing still, the weird thing about Messi is that defenders know what his going to do but they still can’t stop it. Why because his perfected and worked hard to hone his technique.

An all time favorite of Messi. You start by dribbling at slow to moderate pace toward a defender, then feint both with body and feet to take the ball one way. You drop your shoulder, leaning to take the ball right or left, then quickly changing direction and accelerating away from the defender.

You should first practice during your soccer training sessions by your dribbling toward another ball, cone or leaf it doesn’t matter. perform the move slowly, and as you start to feel more comfortable start to increase the speed, while also keeping an eye on making sure that you will put the defender off balance by your feint. The quicker running pace you can perform this move effectively the more you will have the defender on his heels making it easier to put him or her off balance. The next key step is the acceleration away from the defender, you don’t want to be repeatedly beating the same defender, thats why acceleration after you beat the defender is so crucial. You must learn to perform this move with both feet, this will make unpredictable to defenders.

It’s important that you continue to hone and maintain your skills, during your soccer training. Never become complacent, always strive to be better, thats why players like Messi are the best in world, because the worked harder and smarter then anyone else to be the best. The more you put into your soccer training the more you will get out of it.