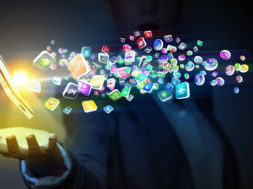 Introduction of new and advanced technologies have brought a great revolution in the digital world. The technology of mobile comes under such great technologies. The use of mobiles is no more limited to the deliverance of personal messages. The advancements in mobile technology and their uses have surprised us to a greater extent, both negatively as well as positively.

Mobile technology has played a dynamic role for education. Students can access Internet through the great technology of mobile broadband. This permit students and researchers to do research whenever and wherever they want.

Observing the way of giving out news, mobile technology now allows us to get breaking news as soon as possible. An individual can now make quick and informed decisions via real time information by mobile technology. The amazing features of Wi-Fi and GPRS have provided the facility of using Internet anywhere and anytime.

As far as the global commerce is concerned, mobile technology has allowed us to market the data we require, by using our mobile phones. Besides that, the introduction of 3G technology has developed the way of conducting business by introducing the characteristics of video calls, sharing large files and browsing the Internet. Among other developments, Promotion of products and brands via mobile is becoming very much active in the world. It’s one of the prominent developments in business in the digital world. It has been found out that the Web and Mobile Marketing are the most productive marketing sources in the digital media.

It’s been expected that the total global IT would increase by nearly six per cent this year. This is expected to happen by means of mobile and other social technologies.

It has also been mentioned in a research that the technologies are finally being integrated with each other, such as cloud with mobile, mobile with social networking, social networking with big data and real-time analytics.

Thus, with the increasing number of masses using mobile technology, projects are reaching a wider pool of prospective clients. On the other hand, mobile banking has let the bankers live an easier life as the convenience in transferring money saves a lot of time.

Mobile technology has become a great helper of people in emergencies as well. According to a research in 2009, 71% of men and 77% of women used their mobiles in their emergency situations.

However, if the proper precautions are not taken regarding the use of mobile technology, one can face a great loss personally as well as in other means. Among many others, one true example is the exposure of valuable data to unauthorized people. Care should be taken for the security of data.

The use of the developing mobile technology depends completely on an individual and the society. It’s our responsibility to make a positive use of this technology. When used negatively, it has a great power to destroy a good part of the world and when used positively, it has the greatest power to let us move ahead and get more advanced in the world of technology.