Traveling With Your Favorite Pets 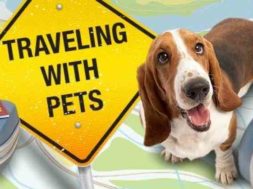 Traveling With Your Favorite Pets

Traveling with an animal should be thought of as similar to traveling with a small child. The worst thing I think I’ve seen to this day was someone who had several dogs loose in her car- all with their bodies half way out the windows (which were rolled all the way down) as well as one dog in her lap while driving! Needless to say, I made sure that I was not anywhere near this woman’s car.

Traveling with pets needs to be taken a little more seriously by pet owners. There are things that you should do to ensure the safety of your furry friends just as you would ensure the safety of yourself or your loved ones while driving. To help put things into perspective, would you travel with your two young children in a car without first strapping them into a seat belt? How many parents do you see with a minivan full of kids who are roaming around and sticking their bodies out the window? Now, let’s take a look at pet owners. Would you drive your car with your newborn baby in your lap? How about your seven year-old daughter? Not only is it distracting, but it is incredibly dangerous. There are enough distractions in a car such as the radio, your cell phone, food and beverages. Throwing animals into the mix further complicates things.

While many pet owners and other pet lovers thing that seeing dogs with their heads and bodies halfway out the window is adorable, nothing could be farther from the truth. At the end of the day, dogs are merely animals, and animals are unpredictable at times. There was one time when I was traveling with someone and their German Shepherd. At the time, the German Shepherd wasn’t full grown, and it was sitting in my lap in the passenger seat. The person who was driving had rolled down my window so that it was three fourths of the way open. Would you know that when we stopped at the next intersection at a light, there was someone who had pulled up along the side of us and they had a couple of dogs in their car…Before I knew it, the dog that had been sitting so pleasantly on my lap suddenly got excited and tried to jump out of the car! We actually had to pull off the road so that we could both reign in this dog to prevent it from falling and injuring itself!

I think part of the issue is that humans treat their animals as if they, too, were humans. In America, people treat their domesticated animals better than they do each other sometimes. We let them sleep in our beds, eat the same food from our tables, etc. However, when it comes to driving, this is where we falter. If we were really treating animals like humans then we would make sure that they are buckled up for their own safety, for our safety as well as for the safety of others.