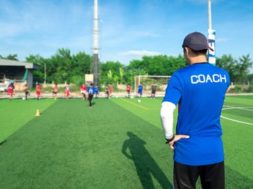 In this day and age of mega salaries for professional athletes in any sports, it is not surprising that many still consider the talented players key to any successful sports team. Owners of professional teams and fans very commonly forget the effective sports coach is the most important person in the team. Instead of spending obscene amounts to lure the best players to the club, owners of sports franchises should invest the most optimum money in the effective sports coach.

He will determine the success or failure of the team. But what exactly does an effective coach possess? How does an effective coach deal with his players? How can the sports coach plan and conduct his campaign such that his players and team ultimate reach their peak performance in sports? These are some of the questions we will explore in a good coach in this article. If you were to study the history of effective coaching, you will not fail to notice that very often these coaches produce very cohesive teams.

Teams with a common goal, and players put the team and others before themselves. There is something magical about a team build on successful team spirit, and all effective sports coaches know this. That is why it is paramount from the on start that the coach builds this strong team spirit and cohesion right from the start. More than anything else, it is a team who knows the true value of team work, team spirit and team cohesion that will produce the most successful results and performances at the end of the day. Sports coaches do not need star players who play for themselves. They need players (not necessarily the most talented) who will die for the team. With these players, the coach can do wonders. Hence, for any aspiring person who wants to be an effective sports coach, build a team first before you train a team.

When team work and team spirit is no longer an issue, the sports coach can next turn his full attention to preparing a solid team for competition. To be successful, thorough preparation for sports competition must be the main aim of a coach when it comes to training the team. Thorough plans must be made for the season, right down to when and where the team breaks for their off-season. No details must be spared to prepare the team for competition. In every training session, the effective sports coach must let everyone know his own personal goals for that session. He must also dictate down to the number of repetitions each player must do for their drills. In effect, the he is reducing practice and competition to a science. As in science, the more certain an input is the more obvious will be the result. So when he decides even what time players must sleep before games, he is not overdoing it. The effective sports coach does his job well by merely being thoroughly prepared on all fronts.

One of these fronts that sports coach must ensure that it is at its optimum is in the field of sports psychology. He must include in his plans, target setting as a group, mental imagery practice, relaxation training, visualization training, mental psyching methods, and constant affirmation training and so on. All these sports psychology training must become part and parcel of a player’s regime that he breathes, eats and sleeps on them. He must ensure that this aspect of training is believed by players. Players who do not believe in this form of approach to sports must be weeded out right from the start. Which explain why the effective sports coach must begin his preparation by building the best team with the most common goals and perspectives in sports? Sports psychology, more than anything now, will determine whether the effective sports coach can produce results.

Knowing and executing the fundamentals of the game is also important. The sports coach must strive to ensure that his players master these basics fast until they become habits to the players. No matter how simple these skills are, players must understand their importance and perform them to their best. He will always have these skills practices included regularly in his training plans. If at any time these fundamentals are forgotten or taken for granted, then he must return to the beginning and tell the players about the very basics of the game, without which, peak performance in sports will not be possible.

And finally, part of knowing his own team, is management of his own players. Every team will be different. Therefore it is important for the effective sports coach be able to handle his players individually under differing circumstances. The job will no doubt be easier if the team has been first built right at the start. That is why the first factor is so important for the effective sports coach. To be an effective sport coach requires not just a passion for the sport or game. The sports coach must be able to build a team from a bunch of individuals, prepare them thoroughly, instilling sports psychology concepts in the players, work on the fundamentals, study his opponents and his team, and also manage his players effectively. Only when the sports coach masters these few areas will he be successfully in achieving peak performance in sports.