Home Sport The Reason Roger Federer Is the Greatest Player of All Time
Sport
May 22, 2019
RandomTalkTeam 0

The Reason Roger Federer Is the Greatest Player of All Time 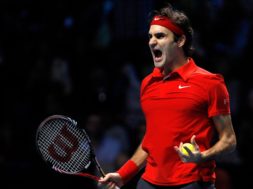 The Reason Roger Federer Is the Greatest Player of All Time

Roger Federer has been known as the best tennis player of all the time. The Swiss player innovated the sport; he can adapt to any surface and can play many different styles of the game. Although Federer is 34 years old and he does not have anything to prove after breaking so many possible records in the Open era, he continues fighting for Grand Slams as well as the number one position in the ATP rankings.

The Swiss player is not considering retirement, and he is very focused on winning the gold medal in the Olympic Games which take place in Rio de Janeiro (Brazil) next year. Since his goal is to win the gold medal at the Olympic Games, Federer works relentlessly to improve in every tournament and develop new techniques and strategies to beat his opponents. Such strategies include his new second service return, which is called SABR (Sneak Attack By Roger) which he introduced this summer. Not only are tennis fans around the world are enchanted with his new trick, but he also managed to win high effectiveness and percentage of points using it.

Many people speculated that after he became a father and started losing more matches than usual, that he would start to think about retirement, but they were wrong. After losing the Wimbledon’s final to Novak Djokovic, another legend, Roger has been having an incredible summer on the hard court. Federer kept 67 out of 69 service games (97.1%) and took 24 out of 59 break points (40.6%) in the US Open. Since Cincinnati, he confirmed 116 service games in 118 possible (98.3%). This is his 10th time in the semifinals of the US Open, but he has not reached the final since 2009. Federer has tried to be the first player to win the tournament six times. The Swiss has also increased the absolute record for attendance, which is 38 Grand Slam semifinals. It is also his ninth semifinal in a season where he already has five titles.

Whenever Roger loses, I, among the other 90% of sports fans, will cry before going to bed. However, let’s just appreciate everything that he has done for tennis at the age of 34 years old. About 2 years ago, everyone said he was done, yet now he is reinventing the sport. No player in history has ever been as enjoyable to watch. No other player has a compilation of videos on YouTube. No one will ever be as peRFect (reference to his brand at Nike, Roger Federer) on and off the court. The reasons why we should be thankful for Roger Federer are endless. However, we should be especially thankful to him for increasing the level of tennis on a daily basis, so that us mortals don’t even need to try play professional tennis anymore. As long as he is winning, we are winning too.

Roger Federer is also an example off the court. He created a foundation 10 years ago that helps kids by giving them the opportunity for a good education in African countries. The foundation’s goal is to reach over a million kids by 2018. Federer’s image has brought many sponsors throughout his life and currently he has sponsors such as Credit Suisse, Jura, Lindt, Mercedes-Benz, Moet & Chandon, Net Jets, Nike, Sunrise, and Wilson.

Roger has been growing and improving his game throughout his career. He has been a role model not only for everyone who enjoys tennis, but everyone who enjoys sports. He is a great idol and gentleman. Federer has won the ATPWorldTour.com Fans’ Favourite Award several times, as well as the Stefan Edberg Sportsmanship Award, and the Arthur Ashe Humanitarian of the Year Award. All these awards show the respect and popularity that the legend has among players and fans worldwide.