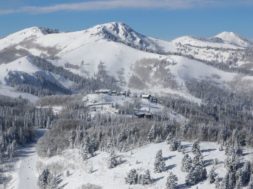 Mammoth Mountain is a stocky hulk of a volcano that stands apart from the Sierran peaks around it. Some 300 miles north of Los Angeles, California, along U.S. Highway 395, this 11,053-foot peak is the centerpiece of a year-round playground. Amidst this alpine region in the Inyo National Forest, numerous lakes and streams and geological wonders await the visitor and offer countless recreational opportunities. In the summer, backpacking, horseback riding, mountain biking, rock climbing, bouldering, boating and fishing top the list of activities enjoyed here. In spring and fall, seasonal beauty offers special allure for hikers, photographers and artists. In winter, a snowy cloak drapes the landscape, beckoning sports enthusiasts to the area’s world-famous Mammoth Mountain Ski Resort, and to nearby cross-country ski and snowmobiling trails. And numerous public and private campgrounds in the area offer year-round camping, making it a favorite destination of many RVers.

Depending on the visitor’s interests, an RV tour of Mammoth-Mono country can be approached from different locations and during any season. As a sample tour to introduce the area, begin your visit at the Inyo National Forest Mammoth Visitor Center, the first right as you’re coming into town on State Highway 203. The center has books, maps, leaflets, displays and helpful rangers to assist visitors in planning itineraries and to issue wilderness permits for overnight wilderness backpacking trips. The center also sponsors ranger-led hikes and evening programs.

Unless you’ll be camping in the Devil’s Postpile area, you’ll have to take a shuttle bus between 7:30 a.m. and 7 p.m. daily to get there. Instituted to alleviate traffic congestion in this very popular area, the bus cost $8 per adult or $4 per child ages 3-15, free for children under 2 years of age, round-trip service. Bus rides between stops in the canyon are free. If you’re going to camp in the Middle Fork Canyon of the San Joaquin River, you should know that the road from the Minaret Summit to Agnew Meadows is curvy, steep and scarcely more than one-lane wide. The shuttle is free after Labor Day into October.

The trailhead at Agnew Meadows are packed with the vehicles of hikers, and the meadow is even more packed with flowers. Horseback trips into the wilderness start at a pack station near here. Both hikers and riders visit such places as Shadow Lake, which the guidebook Mammoth Lakes Sierra called “one of the jewels of the Sierra, particularly because of its setting below the peaks of the Ritter Range.” It is a moderate 3-mile hike.

At Devil’s Postpile, you’ll see a jumble of talus of the Postpile (something like giant, polygonal Lincoln logs piled in the corner) made when basalt lava filled this place to a depth of 400 feet. As the basalt cooled, it cracked to form a honeycomb of columns – in fact, one of the best examples of columnar-jointed basalt in the world.

But volcanism was only one part of the story here and in the Mammoth-Mono area. Glaciers were another. After hiking to the top of the Postpile, you’ll see the tiled floor finish of the column tops. A glacier 4,000 feet thick left not only polish, but also parallel scratches called striations. The glacier also plucked 100 feet worth of basalt off of this formation, although the columns are still another 280 to 300 feet and go straight down.

From the Postpile you can reach the end of Highway 203 at Reds Meadow. The meadow is a resort with a general store, cafe, cabins and pack station offering horse or wagon rides. Just before reaching the resort, you can camp at a Forest Service campground and luxuriate in it’s free hot-spring-heated bathhouse.

Also in this area is the trailhead for Rainbow Falls. The hike is only 1-1/4 miles and re-enters the national monument. The San Joaquin River broadly plunges 101 feet over a lava ledge and partly atomizes into a spectral-colored mist, which is best seen at midday. The rainbow in the mist of the falls is a daily occurrence, as long as the sun is shining.

This canyon is snowed in during the winter, but Mammoth Mountain is open all year. This inactive volcano is home to one of the country’s grandest downhill-ski areas. The skiing terrain is a healthy mix of 30% beginner, 40% intermediate and 30% advanced. Thirty-two lifts and 150 trails covering 3,100 vertical feet serve skiers of all abilities. For the borderline suicidal, there are advanced to expert runs (i.e., cliffs and near cliffs) from the summit, which a gondola reaches in 20 minutes. That gondola is also open for summer visitors who want to hike across the summit to enjoy the scenery from probably the best, most easily reached vantage point around.

Returning to the village, turn right on the Lake Mary Road to get to the Mammoth Lakes. The distinctive granite spire called Crystal Crag dominates this glacier-scoured basin. The cluster of lakes here is sprinkled with campgrounds. Mammoth Mountain RV Park is one of the most popular and is open year-round. In addition to camping, visitors can enjoy fishing, boating, horseback riding and hiking.

From Horseshoe Lake, the farthest one you can drive to, you can hike to McLeod Lake in a half-mile, then on over Mammoth Pass to Reds Meadow. For a memorable meal, picnic at the Twin Falls Overlook, where the outlet of Lake Mamie tumbles over volcanic boulders 300 feet to the Twin Lakes below.

Heading back to U.S. Highway 395 and turning right (south), you can visit more Mammoth attractions. Convict Lake, a 10-minute drive from Mammoth Lakes Village, offers camping, fishing, horseback riding and hiking, including a level, one-mile long trail around the north shore, and trails into the John Muir Wilderness. Mount Morrison looms over the southside of Convict Canyon, and aspens in the campground put on a show in the fall.

Farther south, Crowley Lake is heavily fished, which isn’t surprising, since the fishing is fantastic in the eastern Sierra. During the summer, it seems that every lake and stream has at least one angler on it everyday after brown, rainbow, golden or brook trout. The opening day of the trout season, in April, sees its share of eager anglers, too. You can get a copy of the fishing regulations and a fishing license from just about any store in the area.

Heading back north on U.S. Highway 395, the next road, mostly dirt, leads to the Hot Creek Fish Hatchery and the Hot Creek Geologic Site. The hot springs here provide the hatchery with ideally warm water for the incubation of trout eggs. It is one of the many hatcheries in the area that keep nibbles on the line throughout the season. Hot Creek is open to visitors daily from 8 a.m. to 5 p.m. The nearby geologic site, open for day use only, has boardwalks leading to steaming vents and boiling waters. Swimming is not recommended, partly because of inconsistent mixing of the heated water with the cold creek water.

Continuing northward, toward Mono Lake, you’ll turn onto the June Lake Loop. On your way to June Lake, you can climb an observation deck near Oh! Ridge, so named because of how suddenly you see the lake. The lake itself has one of the best sunbathing beaches in the area. All along the loop, numerous public and private campgrounds accommodate the RVer. Trails strike off from the road, inviting the hiker or horse packer to the higher country of the Ansel Adams (formerly the Minarets) Wilderness and the “back door” of Yosemite.

After passing Silver Lake, where the California record brook trout was caught, you’ll parallel the upper reaches of Rush Creek to Grant Lake. Grant is the main holding reservoir for the Los Angeles Department of Water and Power’s diverted Mono Basin water. From this point, the water goes under the Mono Craters instead of to Mono Lake, to the Owens River. Below the dam, Los Angeles has kept lower Rush Creek – once the finest brown trout stream in the eastern Sierra – bone dry. That is, until three wet winters a few years ago swept trout over the dam. These fish actually re-established their own wild spawning population once again, though perhaps only temporarily. The creek would be dry through the summer, were it not for a temporary injunction brought on by fishermen’s groups and the Mono Lake Committee, which has been fighting to protect Mono Lake. The injunction requires Los Angeles to maintain a 19-cubic-feet-per-second minimum flow. Anglers have been treating the reborn creek as a wild catch-and-release trout stream.

Returning to U.S. 395, head south, crossing Rush Creek, and turn left onto State Highway 120, east toward the Mono Craters, which tower 2600 feet above the surrounding plains. These volcanic craters are practically newborns in geologic terms. This is especially true of Panum Crater. You can take a short trip to the crater’s rim and take in the surroundings. Panum Crater was formed only 640 years ago when explosive eruptions piled up pumice to create the rim, set up by the oozing of a glassy, obsidian plug. To the west, Sierran canyons show the broad U-shape of glacier-carved valley. Mono Lake itself rests in a bathtub-shaped basin with the eastern Sierra as the wall, with faucets on one end and with volcanic highlands forming the rims, but this tub loses water only to evaporation. Today, it is drying up because of Los Angeles’ diversion of four of the five Sierran streams that flow toward Mono.

Return to Highway 120 and turn left. After about three miles, turn left onto a dirt road, then follow the left fork. This takes you to an interpretive trail at the South Tufa Grove. Tufa is one of the most peculiar products of the lake, owing its existence to Mono’s unusual chemistry. Mono’s water is three times as salty as the sea and about 80 times as alkaline, which makes it feel soapy. One type of these salts is carbonates – chemically related to baking soda – which react with the calcium in spring water as it wells up from the lake bottom. The result is tufa. The fragile, other-worldly sand tufa at the nearby Navy Beach was formed in the same way as the tufa towers, except that the calcium carbonate formed in sand. The hardened calcium carbonate holds the grains of sand together in fragile formations.

In spite of its “dead sea” appearance, Mono teems with life. It supports algae, brine shrimp and brine flies by the billions, which, in turn, support nesting gulls and millions of migrating shore birds. The fall migration is particularly heavy. The black, volcanic Negit Island was the main nesting colony for gulls until 1979, when the lake level dropped enough to expose a land bridge. Coyotes then crossed the island and routed the gulls. Thanks to those wet winters, Negit is an island, once again.