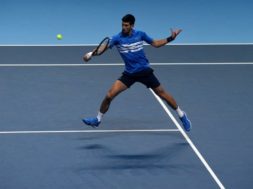 In every tennis match that you play in, it’s very important to just play your game.

That is your main objective in match play.

Make sure that you are not letting your opponent get to your mental game.

Because tennis is 90% mental.

The problem that tennis players have is this, “They think they are playing tennis, but they are actually playing the mental game and they are losing at it.”

Doesn’t matter who you are playing, never forget that.

Play up to your strength and cover up your weak points as best as you can.

Allow the game to come to you and don’t force things out there.

The goal in match play is to get into the flow with the match and find your rhythm, because nothing else matters.

Let’s sum up smart tennis for players at any level,

“Smart tennis is choosing the right shots during points and taking what your opponent is giving you”.

Also stop going for all those winners, instead set your opponent up first and then finish the point off.

Many junior players don’t know how to play the mental game.

The goal here is to be as efficient as possible in match play with the tools that you have right now, it’s doing the little things well over and over again with repetition and focus.

Then after you master them, add more weapons to your game.

Understand that if you want to improve your match play results, you must start in practice.

“You will win all your matches in practice, so if you are not winning now, take a hard look at how you are practicing.”

After you start getting it done there, your matches will get easier for you.

Just focus on playing the best game that you can with what weapons you have now, stop giving away cheap points and play smart tennis.

90% of all tennis matches are lost, because players don’t get this, if they would just stay steady and consistent and pick their spots during play, their feel for the game, would take their mental game to another level.

Break out with the notebook today and start keeping track of your matches, both practice and real matches, write down whether or not you stayed within your game plan while playing it.

Next come up with a game plan for getting better in practice and then implement it at your pace.

Just play your game the next match you play in, try to relax and see how you do, this may surprise you, you may play your best tennis ever.

Give it a try.

0
previous What Cost the Olympic Games?
next Tips to Make Your Golf Cart Tires Last Twice As Long