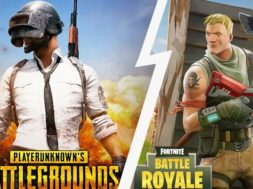 The will be great competition between this to game community as both the game are ruling the gaming industry as we speak.But PUBG developer took a big step by releasing it on Andriod Platform But their hardwork paid off give them a high success. As wee speak PUBG is second most grossing Game on playstore But the epic game all Release their iso version cause the fornite to get their stepping stone in mobile gaming industry which lead into hugh success but according to rumours the are soon release on androids and fornite fan are thrilled by it But Will it be easy to play and free thats the important issue that will show us the winner in the android gaming market. When it comes to PC gaming, you should try to avoid following the crowd. Although, while it does help if the lobbies of the best multiplayer games like Fortnite and PUBG are populated, these games are so big you’ll always get a game.

For some time now, Epic Games’s battle royale effort has been a bigger beast than PlayerUnknown’s Battlegrounds, winning the fight when it comes to the Fortnite vs PUBG player count. Fortnite’s player numbers amount to at least 40 million players a month and over three million concurrent users. Meanwhile, PUBG’s sales numbers have struggled to keep up since January 2018.

You shouldn’t let player count affect your decision of which battle royale game to play, however. You will have a great experience with either and should have no trouble finding plenty of rivals to mercilessly murder

Whilst the mechanics of both Fortnite and PUBG are similar, their maps are surprisingly different. This is most evident in their map size: PUBG’s Erangel and Miramar maps are 8x8km, whereas the single Fortnite map is much smaller. At 4x4km, PUBG’s Sanhok map is the exception: this PUBG new map is even smaller than Fortnite’s killing zone.

Arguably this means PUBG players have to rely more on luck to win on its bigger maps: if the safe zone’s location is not kind, they will need to find a vehicle to prevent a mad sprint to safety. The Fortnite map, on the other hand, does not feature vehicles; its smaller size makes it much easier to traverse quickly and safely.

Erangel, on the other hand, allows for high risk/reward strategies as it has a couple of outer islands that are more likely to hold high-level loot. Sosnovka Island is the largest and is dominated by its military base. Parachuting here is a risky strategy: you might have a better chance of finding good gear, but if the circle shrinks towards a distant location then you will have lots of water and land to cross.

Overall, the Fortnite map is much denser and you will only die to the circle if you are really unlucky or your time management is not up to snuff. However, while more open space in Erangel might make it harder for players to hide, you can only go prone in PUBG. Even the best Fortnite skins and cosmetics ensure you stand out.