Home Food Why Do We Need to Eat Super Foods Today – Some History
Food
March 2, 2020
RandomTalkTeam 0

Why Do We Need to Eat Super Foods Today – Some History 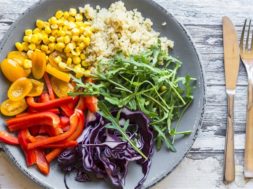 Why Do We Need to Eat Super Foods Today – Some History

The first question is – Have these so called super foods always been available or did they recently get discovered?

Some super foods that are popular today have only recently become widely available from more remote locations. Like rainforest super foods, some Asian and South American super foods and others. These foods, like Mangosteen fruit, Acai berries, Camu fruit, Gogi berries, and many more have always been available in their native locations, and have only in the last few decades been exported around the world.

There are also popular foods that were until recent times not known for their nutritional and health promoting values. These foods may have been know for their value in their native land but only discovered by the people in the U.S. recently. Or through more recent scientific study.

There are many foods that are being called super foods that are very common in the U.S. culture, like blueberries, pomegranates, avocado, kale, broccoli, and many others.

These more common foods are now considered to be foods that have higher levels of nutrition, fiber, antioxidants, minerals or other health promoting benefits. Part of the reason they are considered super food is that when consumed in great quantity or in a concentrated form they can support specific health needs. Generally speaking just eating these common foods every once in a while will not give your body their high nutritional benefits.

Another part of this history of why so many people feel they need to eat super foods or even call certain foods super is because of the low levels of nutrition people are getting from the now common western diets.

There was a time not really that long ago when food was naturally as nutrition rich as nature originally intended. Back before the industrial revolution, back when farming was done by smaller farms, without massive amount of chemicals. Back when crops were rotated, before mono cropping took over.

Back before genetically modified foods, back before food was irradiated. Back when food was produced organically within the balance of nature. In fact at one time we did not need the term organic because all food was produced organically, organic food was the conventional food. Now we have to have the term organic to differentiate between food that is grown naturally in balance with nature as opposed to food grown with chemicals, synthetic additives, laboratory tinkering and other manipulations.

The manufacturing of food using processing practices that dilute the nutritional makeup of the food have caused people to grow unhealthy. People need quality nutrition in the right combination to be truly healthy. If we want to avoid all the illness and disease that can come from a poor diet low in general nutrition.

In poor countries around the world people are ill and have diseases from malnutrition due to their level of poverty and the lack of available resources. Here in the U.S. where people are generally well off, people are also malnourished. But it is because our abundant food supply has been taken over and manipulated to a point where the widely available food in the average super market, fast food restaurant and else where is devoid or highly diluted of the nutrition we need.

The true history of the concept of a super food and the explosion in the use of these foods, is mostly about today’s lack of nutrition in the mainstream food supply. In modern culture especially in the U.S. our health is not being cared for. We have become a culture that only reacts to illness and disease and a lack of good health after we are sick. Then we are told to take drugs to chase away the symptoms of our illness. If our food sources were still high in the natural nutrition nature intended we would be preventing illness and we would not desperately need so called super foods to fill the voids and gaps in our nutritional needs.

The environmental toxicity that we are surrounded by is another reason super food nutrition is so important, we desperately need as much high antioxidant nutrition as we can get to combat the health affects from the toxic world around us.

The history of why we need to eat super foods is about the nutritional quality of the mainstream food supply and the toxic environment that modern western civilization has created.

There is hope, many communities are embracing locally produced foods, people are reexamining their daily food choices. People are reading the food content labels and people are adding concentrated super food supplements into their daily diets.

People are starting more and more to take charge of their own health, preventing illness and disease through eating the correct quality, quantity and combination of nutrition and antioxidant foods. People are also joining together in community to change the toxicity of their local environment which will help the cleanup of the world environment.

Super foods have become a key tool in the movement of nutritional health awareness for preventative health. Super foods act as the new personal insurance for health and wellness.