Home Funny What If There Are No Comedy Movies?
Funny
April 1, 2020
RandomTalkTeam 0

What If There Are No Comedy Movies? 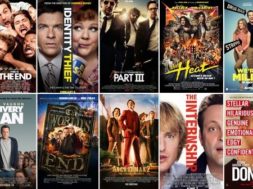 What If There Are No Comedy Movies?

Comedy movies are those movies with the intent – to make you laugh your lungs out. Comedy movies largely focus on humour through exaggeration, dramatic irony, character flaws, sarcasm etc. I don’t know why I am spelling all these out, but I guess it’s because we easily get carried away by the entertainment in comedy movies that we rarely ask ‘what constitutes such dramatic awesomeness?’ Anyway, that is not the concern here; my concern, or no, my worry is, what if there are no comedy movies at all?

I can tell you for free that the movie industry would be less fun, and less attractive. With horror movies determined to scare us out of our own bodies, sci-fi movies sworn to play pranks on our collective intellectual pride, romantic movies committed to tingling our emotional diversities, action movies stirring our physical alertness and promoting violence, and finally, fantastic movies flashing the Greek gift before our eyes; the absence of comedy movies to create some balance would be detrimental.

Didn’t somebody say that laughter boosts health? That the more you laugh the higher your chances of having beautiful children – my own thinking. But seriously, comedy does more for us than just to spur laughter. It helps you ease away, it is an escape from the troubles in this life (especially the ones in Nigeria), it is, not alcohol. Without comedy, we’ll be too serious for nothing; you think your boss hardly smiles? Wait till there is no form of comedy.

Because of the foundation that ancient and modern comedies have set, online creations such as Facebook and Twitter are fun places to spend time on. Almost everybody have become comedians on these platforms or in the very least supporters and sharers of funny content. Those who are yet to join the bandwagon are apparently leading boring lifestyles or are just on social media because they learnt that modernity demands it. Pathetic. Comedy movies have created a pathway that many now follow just for the fun of it.

Finally, if there are no comedy movies the world would become really boring and harder than it is. The sun would have no cause to smile when it is rising in the east and absolutely no darn reason to set in the west, the north might just be its destination.

I’d like to know what you think about this but I ain’t giving a penny for your thoughts.