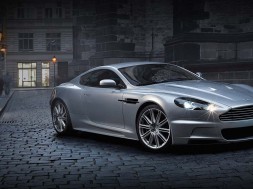 Aston Martin exploited the James Bond links to the max with the 2007 DBS. Unveiled at Pebble Beach in America, not only was the logo similar to the James Bond font, it even came in a special colour €” dubbed ‘Casino Ice’. Linked, of course, to the Casino Royale flick of the year before. Neat, huh?

It wasn’t an all-new car. Rather, it’s a stylised version of the DB9 Coupe €” to the extent that I know of companies who will graft on a bodykit to create a pretty convincing replica.

Such cars wouldn’t be as special, though. The DBS was the first Aston Martin to heavily use carbonfibre body panels, rather than the traditional hand-crafted aluminium. Inside, it was two seats only, while under the hood was a 510bhp version of the V12 6.0-litre from the DBR9 race car. It’s a serious machine, alright €” it even marked the first application of carbon ceramic brakes for an Aston Martin.

Later, the DBS Volante open-top variant followed. Which, yes, was even more expensive? For this was not a cheap car to make.

Sure, Aston tried to do something special with the DBS, but in my opinion it is not greater than the sum of its parts. So, yes, it’s pretty sexy and is known as a James Bond Aston Martin, but the trade isn’t unduly swayed by such marketing collaborations €” cars sell on their worth. It is here where the DBS’ downfall lies.

In my opinion, the Aston Martin DBS is simply too expensive. Aston Martin has missed a trick here and it’s a shame it is priced where it is. Really, it should be seen as a great step up from a DB9 €” but, at 50,000 more, it’s simply too much of a jump. It ought to be a 20,000 – 25,000 ‘new’ difference; given that it is effectively a DB9 on steroids. I’d also like to have seen it be more of a DB9 ‘Speed’ €” similar to the Bentley Speed variants. They generally cost less than 20,000 more than the standard cars, and are rightly doing good business due to this sensible approach. The DBS is more of a visual step up, but 50,000 worth? I don’t think so.

Sure, the very early launch cars did sell for around 185,000, due to exclusivity, rarity, and the Bond factor. Now, though the market has fallen. Cars that list at 160,000 have been offered at 140,000, which is far closer to where it should have been in the first place.

The more recent Touchtronic automatic has also helped broaden its appeal, but even with the Volante and the optional useless rear seats you can quickly increase the new price to 190,000 I offer one simple comparison: the Ferrari California. That costs from under 145,000. Which will the market buy? The Aston is prettier but is simply at the wrong price point. There have been some spectacular discounts on physical cars.

What wouldn’t surprise me, going forward, would be for people to start buying early DB9s in need of new tyres and minor refurbishment. They can then buy those DBS-style body kits, meaning that, for 50,000 plus a 15,000 kit, they can turn their DB9 into a ‘half price DBS’! I’ve already seen high-quality kits starting to appear.

As dealers, we prefer standard cars €” but even so, if it’s a good enough job, and the price is right, such cars will always find a market.