Home Sport Can Messi And Ronaldo Be In One Team?
Sport
October 12, 2015
RandomTalkTeam 0

Can Messi And Ronaldo Be In One Team? 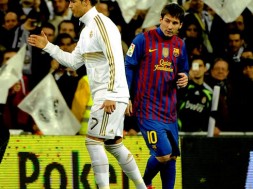 Can Messi And Ronaldo Be In One Team?

Do you think any Soccer coach wishes to have Cristiano Ronaldo and Lionel Messi in a his team? The answer will be, likely all supervisors who have ambition to win medals with their team. But most of them are aware of the problem that may arise from getting a superstar along with another superstar. And they can be not a good mix in one team.

We have seen many times in the past that a bunch of good players together does not necessarily make a good team. Look at the Holland teams for 1998 or even 1994 when there was even fighting amongst the players, or take a look at the Real Madrid team of 2005-2006 which should beat every team put against them with a line up consisting of Casillas, Guti, Zidane, Ronaldo, Robinho, Beckham, Raul and Roberto Carlos just to name a few. It turned out that this team was more a bunch of prima donna´s together that all wanted to be the star of the show. So why are Messi and Ronaldo so successful at this time in their career? The main reason is that they do not have anyone on their team that competes with them to be the “star of the show”. Look at Messi; he has players like Iniesta and Xavi around him, but they “let” Messi run the show. This gives him more freedom and opportunities to show his qualities. The same goes for Ronaldo at Real Madrid. He has players around him like Sergio Ramos, Xabi Alonso and Diarra who are all excellent players, but all play best when there is someone else stealing the show while they “mop up” and win games. This is an excellent reason why ANY team consisting of the right mix of players with either Messi or Ronaldo, can win the Champions League.

So can these two players play together in a team and actually win a medal of some sort. We strongly believe NOT! With two players who are currently happy with the role they play at their teams and amongst their team mates, it seems impossible to improve this “magic” they both create at their respective teams. If these two fabulous players would be put together in one team there would not only be ego problems between the players, but the balance between servicing players and dominating players would certainly be upset and this would not result in good results on or off the field. A similar situation is now occurring in The NBA where, Wade, Bosch and LeBron James are playing on the Miami Heat. Not only does the team not win every game, they might even struggle to win a place in the play offs despite having the “best” 3 players in the league playing for them. Just having “the best” players like Messi and Ronaldo, or Bosch and James, does not mean you can win the champions League just like that.

If Messi and Ronaldo would ever play together it will be in an exhibition match or for a good cause, because with the current price tag on both players AND the difficulties that will come with fitting both players on one team no one will be willing to take this (financial) risk.

26.99K
previous Billiards The Beginning of a Great Game
next A Competition Between Kobe and Michael Jordan