Home Celebrity 5 Celebrities That Are Bossing It on Social Media
Celebrity
March 7, 2019
RandomTalkTeam 0

5 Celebrities That Are Bossing It on Social Media 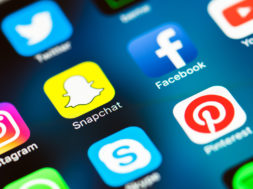 5 Celebrities That Are Bossing It on Social Media

In honour of their savvy skills, we’ve taken a look at those whose social media skills really come shining through. They may not have the most followers (although some probably do), but they sure know how to use those characters.

For a dose of realness coupled with hilarity, you can’t go wrong with Chrissy Teigen. She’s not afraid to speak her mind and show us what life is like when the cameras aren’t pointing. She calls out social media trolls and takes a stand. She also shares adorable photos of her daughter Luna and husband John Legend and is known for her witty captions.

She’s written books with thousands of words in them but can still craft the perfect tweet in just 140 characters – now she has even more room to play with. J.K. is a daily tweeter; engaging with fans, taking a social stand on the big issues and sending a little bit (a lot) of sass Donald Trump’s way.

Unless you live under a rock or aren’t as obsessed with the internet as the rest of us, you’ll know that Blake Lively and Ryan Reynolds are true #relationshipgoals. They aren’t afraid to troll each other (including their now infamous ‘Happy Birthday’ tweets which involved cropping one another out) and Reynolds playing ‘Let’s Get It On’ by Marvin Gaye when Lively was mid-contraction.

The majority of the world may know her as Arya Stark of House Winterfell, but underneath it all her social media reflects the life of an ordinary teenager. One of her most recent posts included confirmation of passing her driving test – something every British teen can relate to. You’ll also love her off-screen gromance (that’s girl romance) with fellow Game of Thrones actor Sophie Turner. Those two know how to throw around the banter.

Uncle George (as he’s fondly referred to by his fans) has almost 11 million Facebook likes. He’s known for his overuse of catchphrase “Oh myy”, his overwhelming support of gay rights – he constantly campaigns for equality in all states – and has spent his time building a strong close relationship with his fan base. He could have retired from Star Trek and lived a cosy comfortably life away from the public eye – he chose the opposite.