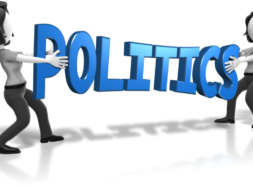 It seems petty politics is an inherent part of our lives. There is no escaping it. We find it implemented by government bureaucrats, corporate department managers and supervisors, and officers of nonprofit organizations, be they homeowner associations, club sports, religious orders, garden clubs, fraternal organizations, or whatever. In most cases, petty politics emerge over turf wars where people jealously guard the fiefdoms they have built for themselves. Somehow it reminds me of two sentry ants, each desperately guarding the entrance to their ant hill from each other, and both unaware the two ant hills are connected by tunnels underground. Neither realizes they are playing on the same team.

Petty politics comes about when small-minded people have been placed in a position of authority and take pleasure in being able to exercise control over other people who would normally smash them like a bug. They desperately want to prove they are someone of importance and should command respect. And therein lies their weakness: Ego. They want to dominate you, not so much as to fulfill their duties and responsibilities, but primarily because they want to neutralize you as a competitor or as someone who might spoil their plans. Ironically, the more they try to intimidate you, the more they lose respect, not just from you, but by others observing the conflict.

When you are faced with a person practicing petty politics, there are a few options at your disposal:

1. Play their game. This ultimately depends how long this person or yourself will be around. If it is nothing more than a short period of time, it might be more expedient to simply let the other person have his/her way. If the person if going to be there longer though, you may wish to consider other tactics, such as…

2. Challenge their authority. This is a “head on” approach that will naturally result in the creation of an enemy; then again, the person was already proven himself to be an enemy from the outset so it might be worthwhile to conquer this problem now as opposed to running into again in the future. This requires you to question their authority, thereby undermining them. Before you do this though, be sure to research the friends of your adversary as they will likely be called into play if you become a problem. In other words, you will not be just fighting the petty politician, but his friends as well.

3. Perform an end-run around your obstacle, either by way of his superior or another person who can perform the service for you.

4. Offering a bribe sometimes works, be it a small present, gift or some other form of remuneration. Know this though, once you have done so, the petty politician will expect it as a regular diet.

5. Ignore them. This can be the most devastating of the tactics taken. Since the petty politician craves recognition, do not give it to him under any circumstance. Do not say anything good or bad about the person, just ignore him. Simply go about your business as if the other person doesn’t exist. Find alternatives instead. If the person has something you need to fulfill your task, just take it; do not ask permission to use it as the other person certainly will not consent to give it to you. Just find another way to get the job done, but ignore the person completely. It will drive him crazy.

0
previous How Can a Person Become a Good Politician?
next Political Environment: How Does It Affect Your Home Business?