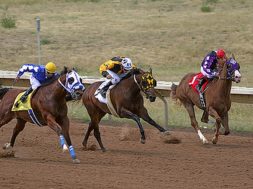 If you’re trying to pick the winner in a horse race, you’ll need to look at the most important factors and early speed is one of them. It doesn’t matter if the race is long or short. Early speed matters even on turf where a lot of horses win from off the pace. Some people think that because a route race is a mile or longer it gives other horses time to close from behind, and therefore, the early speed runners tire and get passed at the finish line.

That’s faulty logic in many cases. First of all, the horse that gets to the front or near the front of the pack can set its own pace. Even when there are several horses in front and they appear to be fighting for the lead, if they have experienced and skilled jockeys, they may just be loping along and pacing themselves, saving some “juice’ for the stretch run.

Another advantage of being in front or near the lead is that there are fewer horses to cause traffic problems. When a horse must close from the back of the pack, it often has to go wide on the turn, giving up valuable ground to get past slower runners or those that are fading.

How do you know which horse has the early speed? There are several ways to determine which horses will go to the front of the pack. But before we discuss them, let’s be clear on one thing. When we say early speed wins races, we don’t mean it has to be the horse that is ahead of all the others. It may be an early pace run that races within a length or two of whichever horse has taken the lead. In many races, the winner may be found in the top three horses at the quarter pole.

Start by using whatever designation your program uses for denoting early speed. An E means a horse that goes to the very front and many times these runners need to be in front, no matter how much that may cost them in the late stages of the race. Pace figures are often given in the last races the horse ran. Finding the horse with the highest pace figures will tell you which horse will go for the lead. Try to keep your selection for win within the top three.

Then there are speed points. Speed points are given for the position of the horse in its prior races. The higher the speed points, the more likely the horse will go to the front of the pack or just off the leader.One good angle is to find a horse that had an extended layoff and came back to the races only to fade in the stretch. If it has had two races or more and faded but shows that early speed, it may have been run back into condition and is ready to win or place.