Home Lifestyle Overview on Some of the Healthiest Eating Lifestyles Around the World
Lifestyle
March 13, 2020
RandomTalkTeam 0

Overview on Some of the Healthiest Eating Lifestyles Around the World 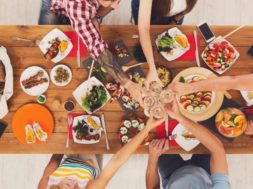 Overview on Some of the Healthiest Eating Lifestyles Around the World

There is a universal wisdom to live a healthy life, but this is not possible unless we all follow a healthy eating lifestyle. If we particularly look at the current scenario, the majority of Americans are constantly battling with food and looking for alternatives in the world to loss their weight. Though many cities in the United States are crowded with numerous health and fitness clubs and local grocery stores are bombarded with low-fat, sugar-free or salt-free products, still the majority of people are overweight. In fact, in other words, we can say that the major population of the United States is unhealthy.

The American diet that generally consists largely of fried food, candy or soda ranks high in fat and processed ingredients and small in nutrients. In addition to this, many youths are taking processed foods that primarily contain upper levels of sugar, salt and saturated fat than unprocessed foods. However, if we look at the certain cultures around the world and have insights on their traditional diets or eating lifestyles, we can easily see that they are not just healthy, but also protect bodies against scourges like depression, cancer and heart disease. Many researchers consider that pursuing such diets can help you live with excellent health. So, before you make that transition in your eating lifestyle, here is some of the healthiest eating lifestyle around the world that you must know-

It is really hard to find an overweight person in Japan. Contrasting to most Western cultures that mostly use the term “food” with pleasure, Japanese too relates eating with healing, but in relation to eating habits, they eat what can keep their bodies healthy, both from outside and inside as well. Basically, the Japanese diet consists of soy products, fresh fish, vegetables, green tea. Their daily meal mostly includes cruciferous vegetables, like cauliflower, cabbage, watercress, kale, parsnips, and turnips. Adding to this, seaweed is the primary component of the Japanese diet for centuries. It is often seen wrapped around bites of sushi. Though at times, it can be seen in salads or soups.

Very similar to the Japanese, Chinese people also consider seafood as an important part of their meal that affects overall health. It is not consumed just for the sake of the taste, but for the benefits that it generally provides to the body, mind and spirit. Usually the Chinese diet is abundant with vegetables, soybeans, with very little amounts of sugar and dairy products. Their diet is mostly based on clean and fresh ingredients. The most interesting point to note in Chinese eating lifestyle is they always try to maintain a balance in life through food and diet. They follow a yin/yang approach that basically involves eating foods to heal the body. They give great consideration to what they eat and frequently pursue specific diets to make sure that they preserve this important balance. Their diet is relatively simple, yet it provides many health benefits.

In terms of overall disease rates and obesity statistics, one cannot deny the reality that the French population is considered as one of the healthiest populations in the world. If you talk about the eating style of French then it mostly includes butter, bread, wine, read meat, full-fat cheese, and of course, dessert. The French population is major food lovers and regularly indulges on pommes frites. Apart from all this, the French diet also includes a range of heart-healthy ingredients and vegetables or fruits are used liberally in meals. Unlike the Americans who generally prefer the quick way of eating, French on another hand hardly ever eats anything dehydrated or hydrogenated.

The Mediterranean region is basically comprised of several countries situated in the Northern Africa, Southern Europe and the Middle East that surrounds the Mediterranean Sea. If we talk about the eating lifestyle of the Mediterranean region, it consists of seasonally fresh fruits, nuts, fish and bean. Moreover, their diet also includes loads of green leafy vegetables, which are rich in beta-carotene and healthy antioxidants. The Mediterranean diet is generally motivated by fishermen and is mostly based on seasonal ingredients. People living in this region mostly prefer to eat fresh food items at different times throughout the year.

Today it is no hidden secret that people who pursue traditional eating styles are healthier. Cultures that have always enjoyed eating styles or diets, which are based on whole grains, fish, and natural foods, still maintain to reap the health rewards. As a result, it will better to take the best of what each traditional diet eating lifestyle has to offer. It’s time to make a transition in your eating lifestyle with a meal that features the best traditional and healthiest cuisines from around the world.