Golf Shafts: Can Make or Break Your Play 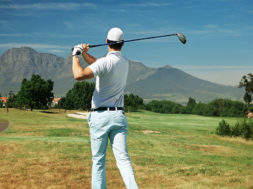 Golf Shafts: Can Make or Break Your Play

Golf is considered a play by aristocrats. It is a game played with club and ball. The general rules lie in the fact that a player needs to put the ball into a number of series of holes in lowest possible strokes. The golfer who gets success in doing that would be called as stroke play. The territory where the golf is played is usually varied from place to place, unlike other games where the territory is quite defined and can’t be changed.

What are the rules, actually?

Now, this was the brief detail about golf and its governing rule. Let us talk about the other, but very important detail in golf i.e. the performance of the golfer. The performances of any player in any game make their career and define the future path. In Golf too, all the focus lies in hitting the ball appropriately and this hit all depends upon the characteristics of the club. The golf club is a Golf stick which is used to hit the ball as said in the above lines. It is a long stick with the club head at the bottom.

The Golf club is chosen on the basis of golfer’s need and playing strategies. The Club has a shaft and club head, which is individually important. Both of the things are important for players. Here we will see about the importance of Golf Shafts.

Then what about the Golf shaft?

The Golf Shaft is the long stick or tube which reaches out to the club head. The Golfer’s hand is connected to the club head through this shaft. This shaft is really important for the players as it totally depends upon the quality and features of the shaft for hitting the ball according to the desired needs and requirements of the golfer. The flexible shaft would let the player hit the ball with less force applied to the club for larger distances while the rigid golf shaft needs more force to hit the ball for larger distances. The quality of the shaft means the material of the shaft also matters a lot. The steel shaft needs more strength to hold it while the graphite shafts that are made from Carbon fibers are much lighter compared to the former. The graphite shaft also reduces the jerk or stinging vibrations felt while hitting poor strokes. It is usually chosen by amateurs and starters who do not know much about the game and more importantly wants to play the game in a lighter note. Once a player gets experience than he or she can go for a heavy shaft or steel shaft.

So what are the other details about the shaft that should be known?

Golf shaft’s weight also matter. As said above the Carbon fiber shaft is lightweight and it hits the ball lightly. And the heavyweight like steel shaft hit the ball hard. The other important thing that is missing here is that the material of the shaft also changes the twist of the club. The little difference in angle of twist at the club head changes the motion and direction of the ball to a great extent. It not only changes the game, but also affects the confidence of the player.

Have you heard about “Kick points”? Then Read further…

The golf shaft has kick points over the shaft which differs in few inches, but actually makes the club hit the ball in different ways. These “Kick Points” are actually the flexibleness of the shaft at a particular point which determines how the club will hit the ball and how much force will be required to strike. The low kick shaft is the ones where the kick points will be present at lower shaft i.e. just above the club head which makes the shaft bend above the club head. While the other kick points will go up and up afterward. The lower kick point will not allow the majority of the shaft to bend and therefore it happens to be good for the high launch of the ball at the start. For example, when a golfer wants to throw the ball at a greater distance with less force than the lower kick point shaft club would be used. Same is with the “medium kicks” and “high kick” shafts.

The golf as said at the start has not same playing territory at all places. It could be a small region or large ground. But the game of golf is totally depending upon the striking capabilities of the striker. The striker should be wise enough to decide and calculate accurately about the force, distance, and quality of the club. All these things will only work out if the golfer is able to decide wisely one more thing and i.e. golf shafts. The material, kick points and length, weight matters to the golfer when it comes to playing or striking the ball.

Does a Golfer’s style matter for choosing golf shafts?

Every Golfer has its own style to strike the ball. Some golfer might be good at striking slowly at small distances while another golfer could be good at striking the ball to larger distances with great force. The golfer would definitely want to go for strength when striking and slower down on the weak points while playing golf. Isn’t it? Then the best decision to buy the club would be choosing the club with a shaft which can strengthen the positives and reduces the weakness in the player. That is why the graphite shaft with lower kick point would be chosen by a player who wants to launch the ball with great force without applying much energy. The steel shaft could be chosen by the golfer which can strike the ball with great force even at great distances.

So that is all about golf and golf clubs. Today we discussed how the golf shaft can make or break the game and why is it important to choose the appropriate golf shaft. The game of golf not only requires the wise decisions and strength while striking the ball, but it also needs a lot of patience and mental strength to play it cool.

0
previous Living an Active and Healthy Lifestyle With Sports