How Bentley Gained Their Name 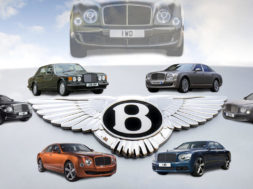 How Bentley Gained Their Name

Two brothers W.O. and H.M. Bentley purchased the soon to become Bentley and Bentley Company from a French automobile company. The company made airplane engines during World War I and in 1919 became Bentley Motors and introduced the first flying B insignia on the 1920 Bentley, a test car. WO Bentley in a visit to a French car manufacturer, in 1919, made the decision to use aluminum instead of cast iron for the engine pistons, because of the aluminum’s lightweight.

The French automobile race the LeMans and other auto racing events became popular in the 1920’s and 1930’s. Unlike the racing of current day, the sport was new and the safety rules, helmets and fire suits that are used today were not required. Builders of these first racing cars were focused on making the cars go faster and designing engines that were high performance, fast and furious on the track. Because of funding problems, Bentley Motors was purchased by a small group of wealthy British motorist, known as the “Bentley Boys”. This group’s collective plan was to keep the performance standards for auto race cars high lead to their winning four consecutive 24 hour LeMans.

Because of poor financial skills, and despite the fact that Bentley’s were beautiful, quality cars the ownership of the company changed hands in 1931. The years of Rolls Royce ownership have been referred to as “the blackest of all.” WO was demoted to a less powerful position and eventually the Rolls Royce and Bentley’s were being produced side-by-side. The Bentley’s became a lower priced version of the Rolls Royce without the distinctive grille. WO had left the company in 1935, he died in 1971. The problems of Bentley’s parent company Rolls Royce caused a significant drop in sales. Under Rolls Royce eventually Bentley’s were floated off to another company, Vickers, under which the high performance standards of its past were resurrected. By 1986 the Bentley had regained its high quality status in the automobile sporting arena.

Bentley’s distinctive design, hand crafted luxury and the signature breath taking performance combined with the performance standards and history makes owning a Bentley a intensely unique experience. Dealers and dealerships do not have to sell you a Bentley, you will seek out their product and unfortunately you may end up on a waiting list. Demand has far exceeded the production rate of this vehicle built with passion. Generations of workers are employed in Bentley’s production facilities and their passion for performance drives their dedication. Whether personal owner driving or defensive driving is your intent in purchasing a Bentley, power is the defining characteristic of all Bentley’s. Visit a Bentley dealership for a driving experience that will take you from ultimate relaxation to ultimate exhilaration.

0
previous Would You Benefit From Making Early Payments on Your Auto Loan?