Algeria As a Travel Destination 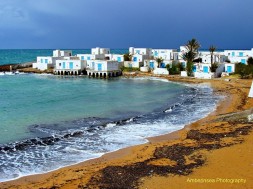 Algeria As a Travel Destination

A good and professional travel agency in Algeria can be instrumental in preparing and implementing a successful tour. Local agents have better understanding of the rules, rates and costs, and can come up with very good options.

The sights of Algeria include a lot of places with the ruins of ancient cities of the Phoenicians, Carthaginians, Romans and Byzantines on the coast of the country.

The relief of Algeria is determined by Sahara desert area, occupying most of the territory, as well as mountain ranges in the north, and the sea coast with fertile land. You will certainly appreciate the time spent in an exciting desert safari, accompanied by the talkative guide. Let the desert be barren-looking, but its depth is rich in oil, gas and valuable species of ore. Oases will certainly please the eye as the brightest part of the landscape. Algerian beaches are very picturesque and will attract you to spend some time at the seaside. Tourist resorts and restaurants have a pretty nice infrastructure.

The historic sites of the country will entertain the tourists with a colorful variety. Be sure to visit Timgad, the ruins of the once famous Roman town. There you will see the once bustling building with thermal baths, a theater, and a triumphal arch. Many buildings have been preserved in excellent condition despite such a venerable age. One will be thrilled by the ruins of an ancient Muslim city, which can be found in the northern part of the Algerian mountains. The national reserve of Algeria, Tassili-Ager, is also worth seeing. This is a plateau in the rocky gorges and caves, where more than 15,000 samples of ancient rock paintings and frescoes can be found.

The cuisine, which follows local traditions, will amaze you with its diversity. Particularly frequent are only fish dishes. Many fruits, vegetables and seafood in various combinations will broaden your outlook concerning the art of making food.

The capital of the country is the ancient city of Algiers, which resembles an amphitheater on the hills near the bay. Most of the buildings are constructed from light-colored building material, which gives the city a unique appearance. Distinctive ‘casbah’ is found in the old part of the city with quaint narrow streets and one-storey houses with flat roofs, beautiful mosques and other oriental buildings. The most visited sights also include the Museum of Ancient History and Antiquity.

In the city of Oran, there is the Great Mosque and the Citadel. Algeria has thousands of kilometers of excellent beaches, rarely used at present.

The ruins of the ancient capital of Hammadid are located among the mountainous areas and are unbelievably beautiful. Kala-Beni Hammad is now a source of reliable information about the ancient fortified Muslim city. Tassili-Ager is the territory, where one can see an impressive number of ancient artificial caves, which are decorated with more than 15,000 drawings and engravings.

The landscape of Mzab valley was formed around the fortified cities. It creates the impression of the time that has stopped. Simple and beautifully combined with the environment, the architecture of Mzab was designed for living communities, respectful of the family structure. Cemil City and its basilicas, triumphal arches, temples, and other buildings are a magnificent example of Roman town planning adapted to the mountainous location.

Tipasa is an ancient Punic trading town of the Mediterranean that was conquered by the Romans and transformed into a strategic military base for the campaign in the kingdom of Mauritania. At the present time it has preserved buildings of Roman, early Christian, Byzantine origin and many other historical sights. The city of Timgad is an excellent example of Roman architecture, built in a square of two perpendicular streets crossing it from end to end.