Plan to Win With a Racquetball Game Plan 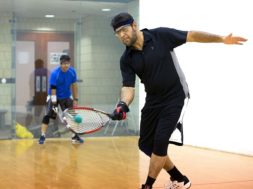 Plan to Win With a Racquetball Game Plan

You will have a much better chance of winning a racquetball match if you adopt a game plan. A game plan is a style of play and a set of racquetball tactics.

Base your game plan on your current skill set. Adopting a difficult plan will lead to frustration and loss of focus during your match.

Then, stay faithful to your plan during your match. Trust that it will give you the winning advantage, allowing you to stay calm and assertive while hitting your shots.

The following example game plans are listed in order of difficulty and level of attack.

This plan involves hitting only ceiling ball shots if the ball is within five feet of the back wall. This includes returning almost all serves with a ceiling ball. Hit passing shots if the ball is waist-high or below. Anything hit above waist-high will go back up to the ceiling. This style of play has the least level of attacking shots, but it also keeps you in control of center court and prevents you from hitting skip shots.

In this plan, base your shot selection on the height of the ball. All shots hit above the waist should go to the ceiling. If the ball is between knee and waist-high, then hit down-the-line and wide-angle passing shots. If the ball is at knee level or below, and your opponent is behind you, then hit pinch or down-the-line kill shots. Reduce the number of difficult attack shots hit from above the waist with this game plan.

If you are side-in and serving, then play an attacking game in the front of the court using pinch and kill shots. In the back court, hit passing shots. However, when side-out, you do not want to hit any aggressive shots from the back of the court, and especially no skip shots. This means returning most serves with a ceiling ball. The advantage of this style of play is that you can “go for it” when you are side-in.

When ahead in the game by 3 to 5 points, play as aggressively as possible with attacking passing shots and kill shots, and hit drive or hard z serves on your second serve. If the score is very close or even, play attacking passing shots, but keep your opponent pinned in the back court and keep the ball off the back wall. If you are behind in the score by 3 to 5 points, then slow the game down with lob serves and ceiling ball shots from the back court. In this case, force your opponent to take the high risk shots from the back court.

OK, this is not really a game plan, but it is the maximum attacking level of play used by professionals. This plan relies on serving hard drive and jam serves on both first and second serves. All shots are attacking passing shots. All serve returns are hard passing shots. Kill all short balls. Use splat shots as often as kill shots. Achieve this game style in 10 years or 10,000 hours of play and practice.

Develop your own game plan that matches your abilities on the racquetball court. When possible, try to evaluate your opponent’s weaknesses and then modify your plan accordingly. Remember, the odds are that your opponent doesn’t even have a plan!